Next up in my series of wintering and preparing for the launch of This is the Boat that Ben Built: a look at what the great blue heron is up to! 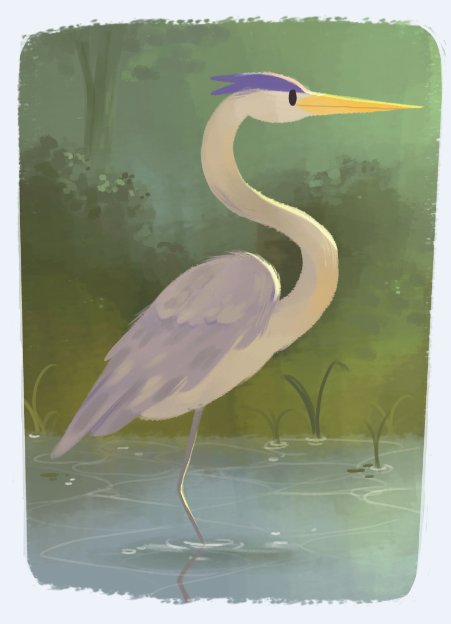 Great blue heron from north central North America are highly migratory because their feeding habitats ice over in the winter. Eastern great blue herons are more flexible with some migrating toward the south and others remaining further north. Populations west of the Rocky Mountains and more southward of the southern USA are non-migratory.

For those who migrate, important wintering areas include the Strait of Georgia, Puget Sound, central California, the US midwest, the Colorado River, Great Salt Lake, the Gulf of Mexico, the Pacific coast of Mexico, and Florida. Banded birds from Canada have been found in Mexico, Honduras, and Cuba.

Those who stay in colder climates are often found “ice-fishing” during the winter: that is, standing very still over small ice holes or pockets of open water in hopes of catching a fish! To keep warm, these birds pull their s-shaped necks close to their bodies. They fluff up their feathers to help trap in their body heat. What about those thin, still legs? Heat loss is minimized in the legs of many birds because of the arrangement of their arteries and veins. The warm arterial blood that leaves the bird’s core warms the cool blood in the veins that return from the bird’s feet. This means that by the time the warm blood gets to the feet, it is cooler than it would be otherwise, and by the time the cool blood from the feet gets to the body, it is warmer than it would be otherwise. Lastly, great blue herons can also adapt by eating rodents, small birds, and snakes if needed.

Except while ice-fishing and waiting for spring, one great blue heron in my life can’t keep still as she spreads the news about the upcoming release of This is the Boat that Ben Built. Preorder now! 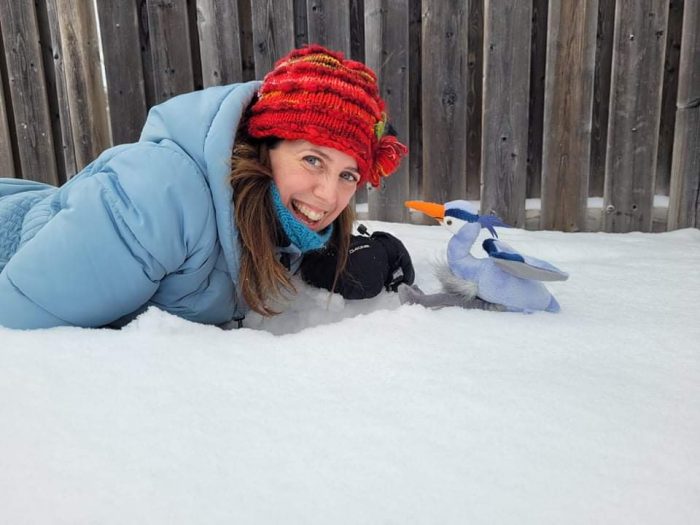