This past week I attended a craft webinar hosted by The Writing Barn called, “Using Your Anger to Write Multi-Layered Realistic Fiction with Ann Braden & Nancy Paulsen.” Ann Braden is the author of middle grade novels The Benefits of Being an Octopus and most recently, Flight of the Puffin and she spoke about how her own anger was the initial fuel for both of these stories. But the interesting thing is, her characters weren’t angry. That wouldn’t work, because it would be giving a child adult anger. Instead, she writes so that the characters feel the consequences of the thing that has caused her own anger, and aims to leave the reader with hope and able to see the possibilities forward.

This morning I read the picture book Amy Wu and the Patchwork Dragon by Kat Zhang and Charlene Chua. In this story, Amy’s teacher shares books with her class that feature all sorts of dragons acting fiercely: they hoard treasure. They blow fire. They fight knights in gleaming armor. When the students are asked to draw their own dragons, Amy draws one with a long, thin body and with horns like a stag and claws like an eagle. It is an Eastern dragon, we learn at the end, but in the meantime her friends Sam and Willa tell her that her dragon doesn’t look like a dragon and Amy ends up doubting herself and drawing a whole series of Western dragons. We learn, “None of them work. None of them feel quite right.” 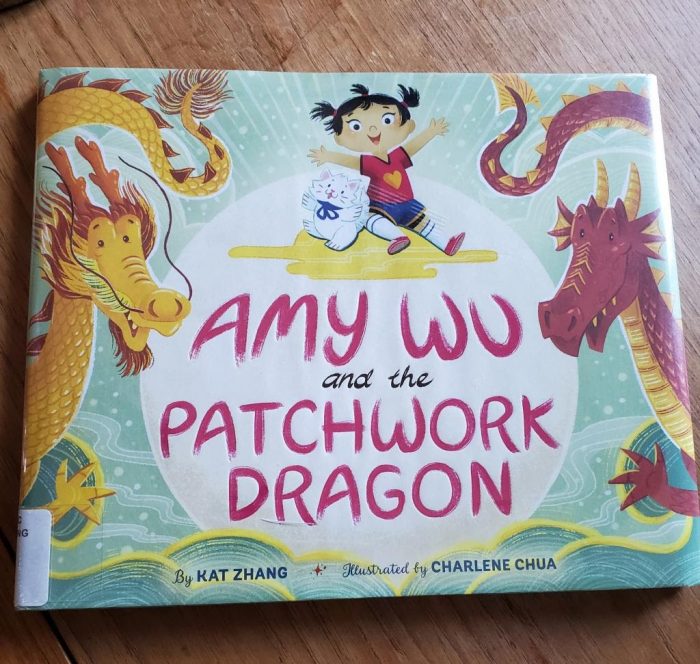 Now, I have no idea if anger was an initiating emotion for author Kat Zhang, but as an adult reader I felt angry that Amy had to second-guess her own dragon. That she and her classmates were only shown one kind of dragon through the books that were shared. But Amy is not filled with this adult anger. Instead, Amy is sad. This is the consequence of the thing that causes me, as an adult, to feel angry – it seems as though there is no room for Amy here. Interestingly, the adults in the story don’t get angry, either. Amy’s grandmother notices her sadness and tells her and her friends stories about Eastern dragons. Perhaps keeping that adult anger in check helps keeps the power and agency with the protagonist, because Amy uses her grandma’s stories as encouragement to take her own steps to solve her problem. Later, Kat Zhang uses the backmatter to compare and contrast dragons from the two traditions, but all the while leaves space for the reader – both adult and child – to do with it what they will. Since it stuck so closely to the child’s viewpoint, nothing in this story feels heavy, yet I think both adult and child readers still come away having learned something that has heavy implications.

After having read this story as an adult reader I am reminded to consider whether I’m seeing something only from my own worldview, and to wonder what other points of view I might be missing. And the child reader? I imagine they would learn that there are lots of kinds of dragons, and that some are fierce and some are wise and just. But mostly, I think a child would feel happy along with Amy when, at the end, she shares her own Eastern dragon with her classmates. Illustrator Charlene Chua shows the joy on the faces of the teacher along with the students – this is an inclusive space where Amy can express herself. So most of all, I imagine the child learns that spaces where you can be seen and express yourself freely are good, happy spaces.

If anger was even a tiny fuel in the writing of this story, it has clearly been transformed. For both adult and child readers, there is hope and possibilities forward. And all while keeping true to the child’s viewpoint.

Have you transformed adult anger into hopeful stories for children? What has and hasn’t worked for you?